An IPO is a fundamental part of our economy and lives, one that’s hard to notice, yet integral. IPO stands for Initial Public Offering, and means just that - a company offering itself (or its shares) to the public. All the major companies that dominate our economic landscape today attained their positions from wealth created via IPOs. For individuals too - if you’re looking to make the best investment choices to grow your wealth, an Initial Public Offering (IPO) can offer a lucrative opportunity provided one has a working knowledge of IPOs. This article looks at all the basics of an IPO you need to know before you start investing in one.

How does company ownership work?

Before deciphering an IPO, it is important to understand how a particular company is owned. A company, in the traditional definition of the term - is an organization comprised of assets which include capital, infrastructure and people. A company buys inputs such as raw materials and labour, rents/buys infrastructure to produce outputs in the form of goods and services.

Companies can either be:

What is an IPO?

An Initial Public Offering is the first offer of shares made by a private company to the general public. In an IPO, the private company offers new shares to the public in exchange for capital. This capital is then used by the company for growth. IPOs are therefore a valuable tool for rapidly expanding companies in need of capital and an opportunity for the public to profit from holding shares of profitable companies. 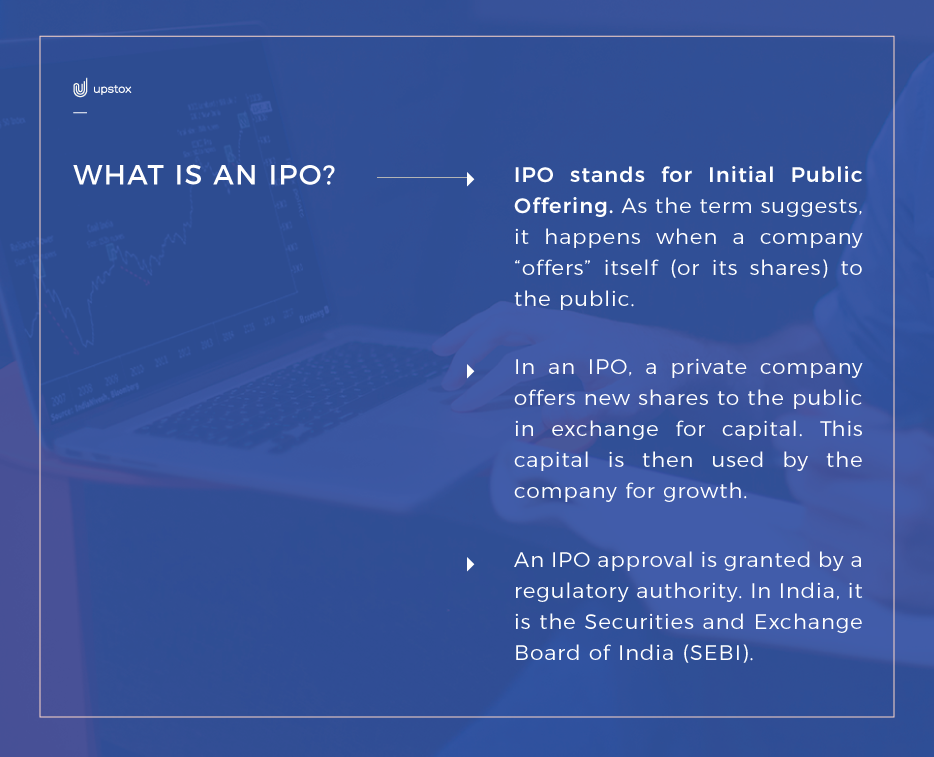 The majority stake of private owners (founders and promoters) is diluted after the company's IPO is released. Their voting powers and influence also dwindles. However, that depends on how existing officers lead the company into its chapter as an IPO. An IPO​ ​is​ ​a​ ​powerful​ ​tool​ ​to​ ​rapidly​ ​raise​ ​capital​​​ ​in​ ​a​ ​company’s​ ​pursuit​ ​of​ ​growth, since the shares are being sold for money.

Quiz: Which of these companies held the biggest IPO in India?

How an IPO works

A company works tirelessly to ensure that it gets an approval to file an IPO. As it is with starting a new business, so is the case with filing for an IPO. Definitely not a cakewalk. An IPO approval is granted by a regulatory authority. In India, it is the Securities and Exchange Board of India (SEBI).

Before an IPO can be approved, it must undergo a long and arduous scrutiny by the regulatory authority to determine eligibility for filing an IPO. Some of the steps involved are:

The IPO is open for a period of 3-21 days during which participating entities can offer bids for shares. Shares may be allotted based on a fixed price or by the building book system where price is fixed after gauging market demand. Fixed price for an IPO is determined based on the amount of bids at different price points.

What happens after the IPO

After shares are allocated to the buyers, the company is listed as a publicly traded stock in a share market. Trade on the shares takes place daily, in accordance with the share market’s rules and regulations. Depending on the market’s demand, the share may be traded at a price higher or lower than the IPO price. Some retail or institutional investors may sell off stocks acquired from the IPO on the first day of trading. This may lead to a fall in stock price later on, due to excessive supply.

The amount of stock in circulation is called float. The company has to make financial disclosures, audit its accounts and release all necessary information as mandated by the SEBI after it becomes a publicly traded company.

When it comes to IPOs, the following are some of the technical terms (jargon) used that you might want to be familiar with:

A decision to invest in an IPO must be financially sound and based on a realistic assessment of the company’s prospects. Many brokerages and banks now provide e-IPO facilities to retail investors where IPO shares can be bid upon online. For more information, you can search online or get in touch with institutions offering services.